Logic:  "In general, we can respect the directness of a path even when we don't accept the points at which it begins and ends. Thus, it is possible to distinguish correct reasoning from incorrect reasoning independently of our agreement on substantive matters. Logic is the discipline that studies this distinction—both by determining the conditions under which the truth of certain beliefs leads naturally to the truth of some other belief, and by drawing attention to the ways in which we may be led to believe something without respect for its truth. This provides no guarantee that we will always arrive at the truth, since the beliefs with which we begin are sometimes in error. But following the principles of correct reasoning does ensure that no additional mistakes creep in during the course of our progress."

I am not good at math, I mean, I am terrible at simple math (thank the lord for calculators!),  and Algebra & Geometry were a distant land and a language way beyond me, but I actually received an "A" in my college Logic 101 class. To be honest, it totally surprised me.  Seemed totally illogical! Anyway, I do think Robert Mueller (see previous post), is presenting an obvious case, and most of us either didn't read his report, don't want to read the report, don't care to read the report, and/or are actively misrepresenting what Mueller actually documented in the report.

I guess people don't read anymore. They just stare at their smartphones and swipe. Human Beings, you are so silly, so lazy, so disappointing. Get it together people! The bad actors amongst us are counting on us not paying attention, not doing the good work of trying to figure out what is really happening all around us. Democracy Dies in Self-Satisfied Laziness and Boredom!

This cartoon from the New Yorker is... elementary... please god... read the fucking report! 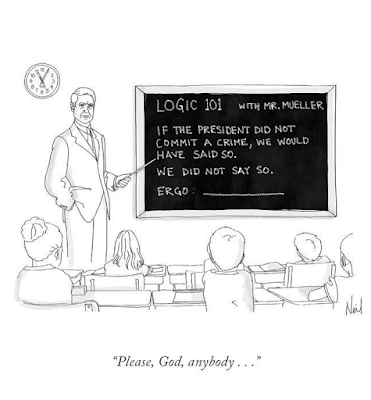 Posted by sunnyjimmy at 7:05 AM