Blame that Deity that told us to "be fruitful and multiply."

I was going to blog about another topic this morning, but then, I stumbled upon the "WORLDOMETER!' You want to scare yourself this morning? Go over and take a look. You can actually watch the population of the planet increase while you have your cup of java. Holy, holy Shite!

This chart, in a glance, kind of illustrates the scope of our present situation... 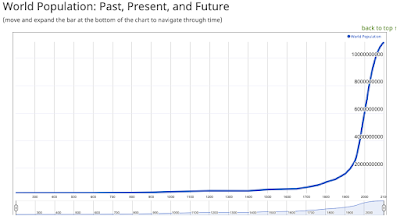 Not to belabor the point, that is a shit-load of humanity.

That kind of growth in nature is usually considered a plague, a cancer, a sign of illness. I don't think it takes a genius to think that many of our problems of resources, of species extinction, of the destruction of the oceans, seas, trees, and topsoil can be explained by this explosion of the teeming, wanting, needing, grasping masses of humanity.

What's the upside? Maybe there are a few geniuses in that mass that can come up with some brilliant ideas? Will anyone listen to them? So many competing interests. Humans are really good at competing with each other. And we love to join groups, clans, tribes, nations. We use those groups, clans, tribes and nations to clobber each other. We are not so good at working together. Can we roll up our sleeves and work for a common goal? The "greater good?" And what exactly is the greater good and who decides?