Paul Krugman Says It Better Than I!

Paul Krugman of the NY Times says everything I've been trying to say over the last month or so. He says it much more eloquently and succinctly. "The Tainted Election." Maybe I should have just waited for him to write it all down in one place?

I am so happy we even have a Paul Krugman. If you have been paying attention, he is a powerful voice of reason with a great soapbox in the Times. He is not afraid to speak and write against "conventional wisdom," especially when that wisdom is pretty much bullshit.

Paul Krugman explains it all for us:

"The C.I.A., according to The Washington Post, has now determined that hackers working for the Russian government worked to tilt the 2016 election to Donald Trump. This has actually been obvious for months, but the agency was reluctant to state that conclusion before the election out of fear that it would be seen as taking a political role.

Meanwhile, the F.B.I. went public 10 days before the election, dominating headlines and TV coverage across the country with a letter strongly implying that it might be about to find damning new evidence against Hillary Clinton — when it turned out, literally, to have found nothing at all.

Did the combination of Russian and F.B.I. intervention swing the election? Yes. Mrs. Clinton lost three states – Michigan, Wisconsin, and Pennsylvania – by less than a percentage point, and Florida by only slightly more. If she had won any three of those states, she would be president-elect. Is there any reasonable doubt that Putin/Comey made the difference?

And it wouldn’t have been seen as a marginal victory, either. Even as it was, Mrs. Clinton received almost three million more votes than her opponent, giving her a popular margin close to that of George W. Bush in 2004.

So this was a tainted election. It was not, as far as we can tell, stolen in the sense that votes were counted wrong, and the result won’t be overturned. But the result was nonetheless illegitimate in important ways; the victor was rejected by the public, and won the Electoral College only thanks to foreign intervention and grotesquely inappropriate, partisan behavior on the part of domestic law enforcement."

Of course, there is more to the story now. Trump may actually be an agent of Russia.  As former Chess Champion and famous Russian Dissident (Yes, it's probably a good time to brush up on your Russian Dissidents), Gary Kasparov says on Twitter... 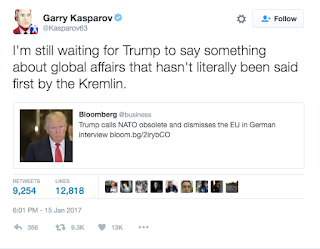 Yes, and it seems that Mr. Trump is almost assuredly a Russian Asset. Witting or unwitting? If hard evidence of collusion between Trump and the Russians, or Trump's team and the Russians emerges, all hell will break loose. I mean, isn't that treason?

I am counting the days for the next shoe to drop! Oh yeah, and by the way, Trump is an illegitimate President. Not my President!
Posted by sunnyjimmy at 7:49 AM