The President is caught in the act of shaking down Ukraine, spinning disinformation, trying to smear a political opponent, trying to steal another election, holding $ as leverage. Blatant corruption. Impeachable. "Violating his Oath of Office." Serious shit, right? Little Baby Man is basically caught with his pants down doing more "crime-ing." He just can't help himself.

He is uniquely Corrupt & Ignorant. Hard to tell what is more dominant in his psyche. Maybe they are  co-equal branches in his deeply dysfunctional mental landscape?

"Hey, look over here! Nothing to see! Move along! You can't believe your lying eyes and ears!"

It's seems some of his Republican defenders have very poor "reading comprehension." They just don't want to know. The rest of us can plainly see that this time, there is no doubt, Little Baby Man has stepped in it, big time.

Finally all he has left is the old Marty Feldman/Igor/Young Frankenstein Defense. "What Hump?!"

Postscript: Yeah... this one is called, "whack job." Is it any wonder two old white guys with advanced brain dysfunction are leading the destruction of the USA and the GOP? There are remedies. Impeachment & Prison. 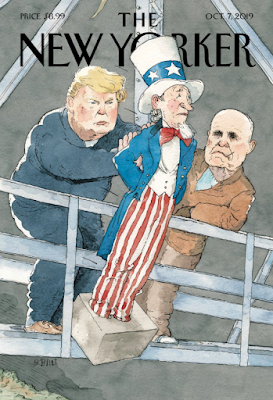 Posted by sunnyjimmy at 8:01 AM