"Small Acts, When Multiplied by Millions..." 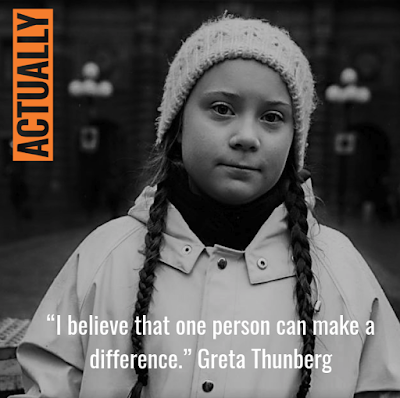 Yes, thinking a bit more about Greta Thunberg. Every movement needs a leader (see two previous posts). Or make that many, many leaders. One young woman stands up, speaks out, demands action, and captures international attention. Maybe she is the MLK, the Mandela, the Cesar Chavez of our Climate Catastrophe? Maybe her courage, fearlessness, her plain-spoken-ness, her bold truth-telling will inspire others? Speaking Truth to Power.

Moral Authority? Where does it come from? Usually some kind of suffering. Often from the outsiders, the ones who don't fit in, those who are marching to a different drummer. Those who don't just "get along and go along."

Greta Thunberg suffers from Aspergers Syndrome. She considers it her "superpower."

"I have Asperger's and that means I'm sometimes a bit different from the norm. And – given the right circumstances –being different is a superpower." - G. Thunberg


Thunberg's attributes — including her fearlessness and ability to speak and act so matter-of-factly — that makes hers such a potent voice. He writes:

She disdains celebrity. She makes no claim to heroism. She rebuffs efforts to idolise her. She isn't calculating or preoccupied with fame or ego. There is no artifice about her. She speaks plainly, without affectation or embroidery.

In words and deeds, Thunberg is the embodiment of philosopher Howard Zinn's admonition: "We don't have to engage in grand, heroic actions to participate in the process of change. Small acts, when multiplied by millions of people, can quietly become a power no government can suppress, a power that can transform the world."

Posted by sunnyjimmy at 7:33 AM