We are at the Precipice...

Josh Marshall at TPM has been a fantastic resource on the Russian Asset/Dupe in the White House story. An excellent, clear-headed writer. He knows all the ins and outs of this saga. This is where we are now, at the precipice (emphasis provided by me) ...

"Trump is in many ways his own worst accuser. Anyone who’s been in business for decades would not welcome a searching legal scrutiny of years of business. Most people, certainly in Trump’s line of work, aren’t totally clean. And a determined prosecutor can often find technical infractions that in the normal course of things would never be an issue. So no one would like this. But Trump is willing to run the most unimaginable political and even criminal risks to block even the beginnings of a serious probe into his business history and the 2016 election. We are far, far past the point where there is any credible reason to doubt that President Trump is hiding major and broad-ranging wrongdoing. No mix of ego, inexperience, embarrassment or anything else can explain his behavior. It just can’t. He’s hiding bad acts. And the country is likely heading toward a major constitutional and political crisis because Trump is signaling that he will not allow the normal course of the law to apply to him – a challenge which puts the entire edifice of democratic government under threat." 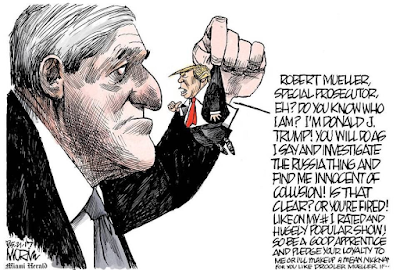 Posted by sunnyjimmy at 6:22 AM