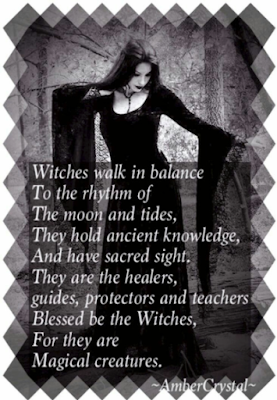 The Season of the Witch.  If I remember my Wizard of Oz correctly, there are good and bad Witches. Witches are women with magic powers. Also think of a "Woman or Girl who is Bewitchingly attractive."

All this hurly burly, toil and trouble in Social Media. Seems the Patriarchy is imploding. The White Goddess is rising. Some folks, for instance, that Alabama candidate for Senator dodging sexual harassment/predator claims, is calling it all a "Witch Hunt."

Funny thing, it is, but not in the way he means it. No, they are not searching for a Witch that doesn't exist, yes, the Witches (the good and bad, the bewitchingly attractive) are doing the hunting! And they are calling out the bad actors amongst us.

So what happens when the Patriarchy falls? Do we replace it with a Matriarchy? I don't think so. Concentrated power, whether it's male or female is just not a good idea.

I propose a Meritocracy - (merit, from Latin mereō, and -cracy, from Ancient Greek κράτος kratos "strength, power") is a political philosophy stating that power should be vested in individuals almost exclusively based on ability and talent.[1] Advancement in such a system is based on performance measured through examination and/or demonstrated achievement in the field where it is implemented.
Posted by sunnyjimmy at 7:15 AM