Hilary Clinton - Lord of the Flies!

We attended a dinner party on the evening of Halloween 2017 - also known as Allhalloween,[6] All Hallows' Eve,[7] or All Saints' Eve,[8] is a celebration observed in a number of countries on 31 October, the eve of the Western Christian feast of All Hallows' Day. It begins the three-day observance of Allhallowtide,[9]the time in the liturgical year dedicated to remembering the dead, including saints (hallows), martyrs, and all the faithful departed.[10][11]

Great conversation with folks from Texas, New Jersey, Illinois. Topics ranged from Science, Art, Religion, Pop Culture, and of course, Politics. We discussed the 2016 Election. Discussing Hilary Clinton I noted that she was not well-liked by lots of folks, but "I mean, it's not like she is Beelzebub" - In theological sources, predominately Christian, Beelzebub is sometimes another name for the Devil, similar to Satan. He is known in demonology as one of the seven princes of Hell. The Dictionnaire Infernal describes Beelzebub as a being capable of flying, known as the "Lord of the Flyers", or the "Lord of the Flies". 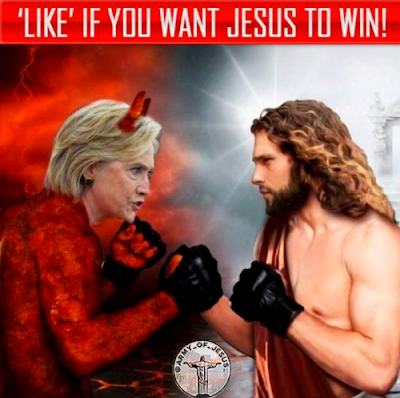 I Googled "Army of Jesus" they tell us: "We believe that if you go back to the mud after being washed, you must wash yourself again and come back to seek the Lord."
Posted by sunnyjimmy at 7:36 AM