The Old Gods Still Live Amongst Us! 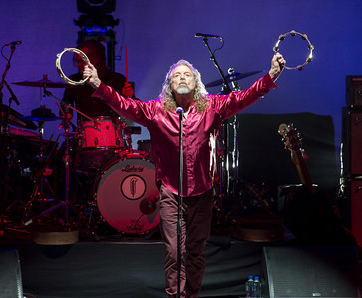 We went to Millennium Park in Chicago to see Robert Plant and the Sensational Space Shifters last night. It was blazing hot in the City. Totally alive. People everywhere. A big throbbing, sweaty, over-stuffed Metropolis. Millennium Park's Music Pavillion is one the great music venues in the land. Big, bold, impressive sound from the Lares "electronic sound enhancement system: that uses microprocessors to control multiple loudspeakers and microphones placed around a performance space for the purpose of providing active acoustic treatment. LARES was invented in Massachusetts in 1988, by engineers working at Lexicon, Inc."

And what of Robert Plant and his band? Thrilling. Yes, the old Rock God now prowls the stage like a Long Tall Cool Old Goat. He is a Satyr, or maybe a living embodiment of the ancient Greek God Pan.   He conjures magic on stage, casts a spell. His voice is still a powerful, lovely, uncommon thing. A living legend.

And the Sensational Space Shifters are sensational. Everyone a virtuoso. They played new songs, old songs, a good mix. They opened with 3 classic Led Zeppelin songs and the crowd was in total ecstasy. Two guitar players helped conjure the spirit of Jimmy Page, who sort of hovered over the whole thing like a dark, misty, mountain cloud.

Still Plant and the Shifters even transcended the Led Zeppelin past, and brought that music fully alive in a new way. And their own "Carry Fire," was one of the great highlights of the set. A good time. Transcendent R&R. Good to know that old Gods still live amongst us.
Posted by sunnyjimmy at 7:46 AM