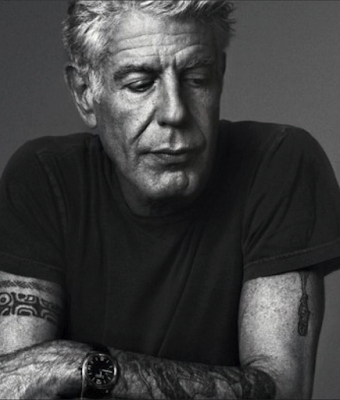 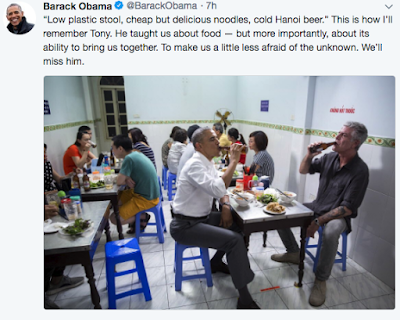 I must admit, yesterday, all day, I was a swirling hurricane of colliding thoughts and emotions. It's so weird. I didn't know Anthony Bourdain (see previous post),  except through his work, and I can't really explain why his self-administered death hit me so hard, but this celebrity culture we live in, makes it easy to develop a "relationship" with famous people we really don't know.

Bourdain, ( according to me), was one of the "cool guys." You don't have to be a guy to be a "cool guy," you can't lobby to be a cool guy, you either are cool, or you're not. My impression of the man: Lively, Funny, Brilliant, Engaged, Thoughtful, Inspiring, Hopeful, Grounded, Progressive, Successful, Humble, Fierce Advocate for Women & the Common Man. Good Food, Good Thoughts, Good Life. See "5 Anthony Bourdain Quotes that Show Why He Was Beloved Around the World."

So his death, by his own hand, really shattered my picture of all of that. I mean, it doesn't erase the man, or what he meant to me. I am inspired by the man, he showed us how to live a fully engaged life, but at the same time I am left baffled, disconcerted, confused, saddened, and I suppose a bit threatened by his suicide. You can't walk in another person's shoes. No one else knows what's in another beings' heart and head.

Every day is a challenge. There are reasons to live. Reasons to die. Every one has their own reasons. And each of us is a mystery. "Dear Media: When You Cover Death By Suicide, do it Thoughtfully."

"Suicide prevention experts caution that suicide is never the result of a single precipitating factor, but instead a complex web of factors."

I think of Sigmund Freud and His "Life and Death Instincts - Freud.... proposed that the death instincts were an extension of that compulsion wherein all living organisms have an instinctive "pressure toward death" which stands in stark contrast to the instinct to survive, procreate, and satisfy desires."


Yes, I think there is a war inside of us. Eros vs. Thanatos. It's a battle every day. I think of the simple easy reasons to get up each day and to live: a new day, a new idea, a new book, a friendly smile, a good cup of coffee, a good meal, sunshine, a rainy day, a friend, a poem, a song, love, or the possibility of love. The vast "Sea of Possibilities." You hope that is enough. It is enough. To live. 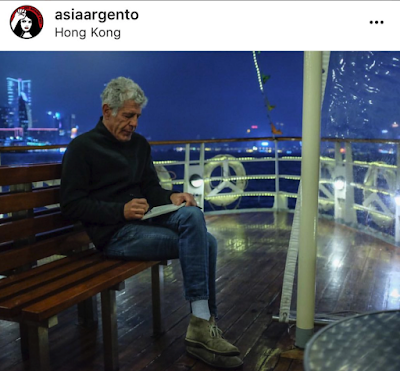 Posted by sunnyjimmy at 8:15 AM