Meat is Murder, Yes, Of Course! 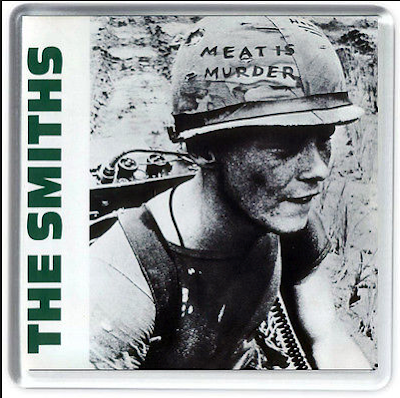 I am a total music geek. I am a big fan of the series of books on famous albums printed by 33 1/3.  I have read a healthy number of books in the series so far. I jump around and betray my musical tastes: Led Zeppelin's "Zoso," Neil Young's "Harvest," Patti Smith's "Horses," My Bloody Valentines' "Loveless," the "Velvet Underground & Nico," Bob Dylan's "Highway 61," the Rolling Stones' "Exile on Main Street," Big Star's "Radio City, " Talking Head's "Fear of Music," Radiohead's "Kid A," The Beatles' "Let it Be," David Bowie's "Low," U2's "Achtung Baby,"  Sigur Ros "()"

I just finished Joe Pernice's "Meat is Murder," by the Smiths. When I bought it I figured it would be a track by track analysis of the record, like some of the others I have read. But I guess the beauty of the series is each book is a bit different, it is up to each author how they want to tackle the album, and the artist, and how they figure themselves in the story.

In Joe Pernice's case you get "fiction." Which, if I knew going in, I might have avoided. I am so glad I just bought the book without any idea. It is brilliant, beautiful, funny, powerful. A perfect evocation of growing up in a Catholic High School. Young. Desperate. Bored. Hormones hopping. Dealing with all the peer pressures. Girls. Sports. Popularity.

If you've ever been a teenager, if you went to high school, don't worry, you can relate to this brilliant little book. Joe is writing about a school in Boston in 1985: Reagan, "Just Say No," AIDs, Suicide, Alienation, Asthma, Catholic Nuns.

If you lived through the 80's this will all ring true. Plus of course, the Smith's great record is the soundtrack. As the blurb says: "In this brilliant novella Joe Pernice tells the story of an asthmatic kid's discovery of Meat is Murder."

Highly recommended!
Posted by sunnyjimmy at 7:32 AM