"The Healthiest Individual Ever Elected to the Presidency!" 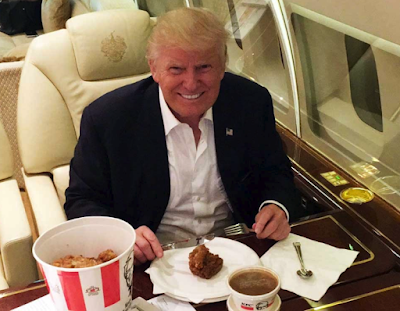 When Dr. Harold Bornstein described in hyperbolic prose then-candidate Donald Trump's health in 2015, the language he used was eerily similar to the style preferred by his patient. It turns out the patient himself wrote it, according to Bornstein. "He dictated that whole letter. I didn't write that letter," Bornstein told CNN on Tuesday. "I just made it up as I went along."

"His physical strength and stamina are extraordinary," he crowed in the letter, which was released by Trump's campaign in December 2015. "If elected, Mr. Trump, I can state unequivocally, will be the healthiest individual ever elected to the presidency."

Even his personal physician finally admits it was a ridiculous charade: "That's black humor, that letter. That's my sense of humor," he said. "It's like the movie 'Fargo': It takes the truth and moves it in a different direction."

For most of us, that is not easy to do. You know, most of us cannot lie about everything, anything; we can't stand up in front of other folks and say things that are easily & quickly refuted. The Average Joe is left with the question: "Why would he lie about that? Who does he think he's fooling?"

So it's a talent all right. But it's basically useless. I mean, this can only bring us to a Constitutional Crisis of mega magnitude. The Gong is ringing. Madly. Time to get that clown off the stage. But of course, this particular amateur is making noises that he will not go easily.

Robert Mueller the 3rd, III, "Bobby Three Sticks" is on the case. Relentless. Like that shark in "Jaws." I do think as Garrett Graff, who wrote a book on Mueller gets it right (a must-read article in Wired): "Robert Mueller Likely Knows How This All Ends."


1. Mueller always knows more than we think.
2. Mueller is building a bulletproof case.
3. There are more loose threads than ever.
4. We still don’t know the biggest, most important evidence.
5. Mueller likely already knows how this story ends.
Posted by sunnyjimmy at 7:35 AM