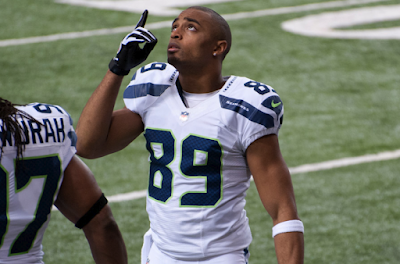 Pillippe Reines, one of Hilary Clinton's former aides, calls it: "KNEELING TO A TYRANT!"

I stand with, I kneel with, I totally agree with Seattle Seahawks Wide Receiver Doug Baldwin when speaks about our Little Baby Man Prez...

“He’s an idiot, plain and simple,” Baldwin said Thursday in a news conference. “I mean, listen, I respect the man because he’s a human being, first and foremost. But he’s being more divisive, which is not surprising. It is what it is.

"But for him to say anybody who doesn’t follow his viewpoints, or his constituent’s viewpoints should be kicked out of the country, it’s just not very empathetic. It’s not very American-like, to me. It’s not very patriotic. It’s not what this country was founded upon. So it’s kind of ironic to me that the President of the United States is contradicting what our country is really built on.”


Just why do they sing that damn song before every game? Blame Francis Scott Key and the Cubs and Red Sox in 1918. Folks being overly-patriotic.  Isn't that the last refuge of a scoundrel?

Anyway I always kind of loathed the song, and loathed the ritual. I'm glad I was born in the USA, I'm about as American as you can get. But really, the only version of this song I ever liked was Jimi Hendrix' (born in Seattle) version that he played Monday morning on the 4th day of Woodstock. His version conjured up the Vietnam War, the mayhem, the murder, the Rolling Thunder, with all the bombs and machine guns and noises of death included, conjured up by his genius and his Stratocaster...

Posted by sunnyjimmy at 7:40 AM