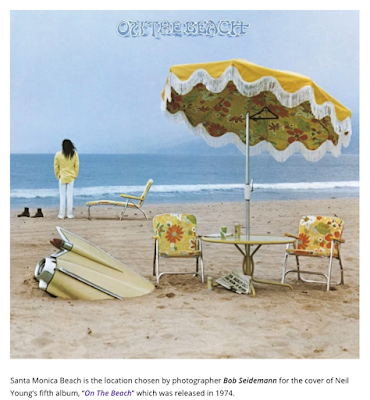 Neil Young's "On the Beach." This album cover came to mind this a.m. 1st day of Impeachment Trial 2020. It was 1974. The end of things. The 60's were definitely over. Nixon, who won in a landslide in 1972, was imploding. He famously declared at a press conference: "I am not a crook." Most of us knew he was lying, that in fact he was a crook. What is the headline on the front page of the newspaper, under the table, laying on the beach? "Senator Buckley Calls for Nixon to Resign."  Surprisingly, improbably, Nixon did.

What about 2020, and this corrupt, toxic, clownish, President? Could the same end of times scenario be playing out? Highly unlikely. But of course, some of us believe that the future is unwritten. Anything is possible. The full story has not yet been told.

I do have a long-running gentleman's bet with my local barista that 45 doesn't make it to November 2020. Don't know how it will all coming crashing down, but I'm betting that it surely will.

I believe that we are at the end of things. Our current dysfunctional President is a blight, a scourge, a toxic-waste dump of a human being on his way out. He will be a sad footnote in the history of our Democracy. Years from now, no one will admit they even voted for the man.

Mark Twain: "History doesn't repeat itself, but it does rhyme." Yes. I think we are rhyming now.

So of course, the a.m. soundtrack is Neil Young's "On the Beach." A bleak, beautiful masterpiece. Always makes me happy. There's "Revolution Blues" - Neil's ode to Charlie Manson. So many great lines. So many great songs. "The world is turning, hope it doesn't turn away."
Posted by sunnyjimmy at 8:09 AM