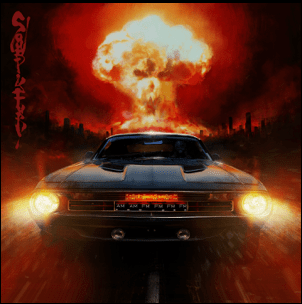 A.M. Soundtrack - I just immediately went to music this morning.

A long, refreshing sleep. That doesn't happen often around here. I usually wake with a start. Often feeling under siege. Not this morning. Slept like a baby. Maybe reading "The Brothers Karamazov" before falling asleep helped? That fine novel, really is fine. It took awhile for me to synch to it, but now 700 pages into it, I am totally won over. A big, sloppy, polyphonic novel. Many voices, many moods, those "crazy Russians." So human. The novel actually seems perfectly of the moment. Spirituality/Sociology/Psychology/Politics mashed up into these very, very flawed and excitable, depraved, debauched and contradictory human beings.

So, yes, to the soundtrack - Sturgill Simpson's "Sound and Fury." (2019). An atomic bomb of a record. Mushroom cloud and Mustang motor vehicle from hell on the cover. It's the soundtrack to an anime film by Junpei Mizusaki. I haven't seen the film yet. Simpson is a trip. He's made 4 records. We own the last three records to Sturgill's credit. All three offer very different moods and colors. All three albums absolutely astonishing. Simpson sounds a bit like Waylon Jennings, but think of an over-the-top, Outlaw Cowpoke Waylon hyped-up on amphetamines, magic mushrooms and acid. Pissed-off. Brimming over with energy, emotion and intelligence. This one has synthesizers and heavy metal guitars. Heavy. Slaps you up the head. Really. Written on the back cover of the cd booklet in bold letters: "Fuck Your Speakers." Yes. Turn it up loud! Sound and Fury, indeed.
Posted by sunnyjimmy at 9:16 AM