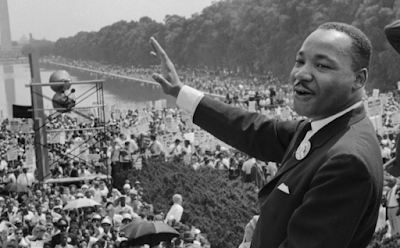 MLK Jr Day. We all want to live in his "Beloved Community." Maybe some of us don't know it yet. But if the world is in crisis, and it is, it's because humans are in a spiritual crisis.

Martin Luther King Jr. said, “Our separate struggles are really one—a struggle for freedom, for dignity and for humanity.”

And in his 1963 “Letter from Birmingham Jail,” a response to local clergy who objected to “outsiders coming in,” he issued perhaps his most eloquent defense of the beloved community as a global phenomenon: “Injustice anywhere is a threat to justice everywhere. We are caught in an inescapable network of mutuality, tied in a single garment of destiny. Whatever affects one directly, affects all indirectly.”

What is the soundtrack this a.m.? Sly and the Family Stone's "There's a Riot Going On."  (1971) - A funky, soulful, groove-thing, masterpiece. A party out of bounds. Druggy, trippy, hooky, engaging. Makes you want to dance around the kitchen on the way to the coffee machine.

"It's a family affair." No doubt. We are all in the same family. Whether we want to know or acknowledge it or not.

It's a forward-looking record. Songs kind of flow into each other, the grooves are smeared across the record. "A dense mix." Not a collection of singles, a song-suite. A complete vision. Including, I kid you not, yodeling. As they say, it was recorded when there was "drug use and intra-group tension." Hah! "Thank you for letting me be myself..." Makes for a fabulous record. Love to love, to love. Totally Beloved!
Posted by sunnyjimmy at 8:44 AM