53 Republican Senators: "See No Evil, Hear No Evil and Speak No Evil."

Part 1: Adam Schiff,  Lead House Impeachment Manager, spoke for 2 hours. He presented a brilliant, cohesive, fact-laden case against the President. Reasoned. Logical. Cogent. A perfect narrative laying out a grand, corrupt scheme. It was powerful, devastating, and ultimately inspiring.  I do have to say it sounded to me like a rock-solid case. Every detail fit. Every detail was damning. Schiff laid it on the line. Our Democracy is under threat from a lawless President. We are in a real constitutional crisis. A real pickle. The only remedy is Impeachment.

Of course, word is that  the 53 Republicans in the chamber were either sleeping, slipping out into hallway doing their best to not hear, looking down at their shoes, etc. Really they just do not want to know. Here is a shot of key members of the GOP at the trial, "See No Evil, Hear No Evil and Speak No Evil."

Part 2: We took a trip to the Art Institute last night to catch the Andy Warhol show. It is an excellent show. You see the evolution of an artist, from an advertising sketch-artist, to a subversive, revolutionary artist making provocative prints, and turning ideas of art & trash upside down. A key figure in Pop. A key figure in the melding of art and commerce. An artist mashing-up Fine art, Advertising & Celebrity Culture. Give Andy some of the credit, some of the blame. Can't imagine the 60's & 70's without Warhol. It was cool to see the iconic works: Marlon Brando, Jackie O, Liz Taylor, Marilyn, Mao, Electric Chair, Mug Shots, Car Crashes, Campbell's Soup, Matchbooks, Poppies.

15 mins of fame.  We live in that totally self-absorbed, everyone is a celebrity, selfie culture today.

This image of Richard Nixon is one I've never seen before. A demonic-looking Nixon. Perfect image for Impeachment day. And the "Vote McGovern" made me think of alternate realities. What if McGovern had actually won in 1972? He lost to Nixon in a landslide. The Watergate Scandal was brewing under the surface. McGovern was a war hero, one of the finest people ever to run for President, and he lost to one of the worst humans ever to be President. You wonder how things would have been different if McGovern had won against the Dark Prince of USA politics? One can dream. 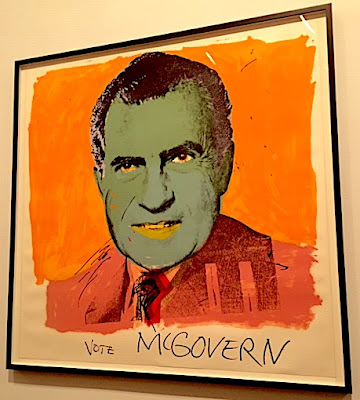 What's the a.m. soundtrack? Radiohead's "A Moon-Shaped Pool." (2016). It opens with strings, violins in violent staccato fashion, and Thom Yorke's flighty, fidgety bird-like voice. Thom often sings about the things that are disturbing him, and pretty much everything disturbs him.  "Burn the Witch:"

Thom is super-sensitive, super-intuitive. I believe he is a clear-seeing, clairvoyant. A seer and prophet. So alive. His voice is extraordinary. He is an artistic canary in a coal-mine. He's often in panic mode. Often, I have no idea what words he is singing, his tone is so seductive, so captivating, I get lost in the beauty of his voice. His voice is an very evocative instrument. But there is always meaning to be found in his lyrics. It's always worth the effort to parse the words. Yorke always casts a  captivating and enchanting spell. A key voice in our present/now dystopia.
Posted by sunnyjimmy at 8:30 AM