Our Right and Our Duty...

This is from Germany, where the folks there have significant experience to draw upon, dealing with an authoritarian, nationalist leader. I don't know German, but here is a helpful translation:

“Trump protected himself from protests in a bunker in the White House. We as Germans can say from experience: From this point on, things usually go downhill.” 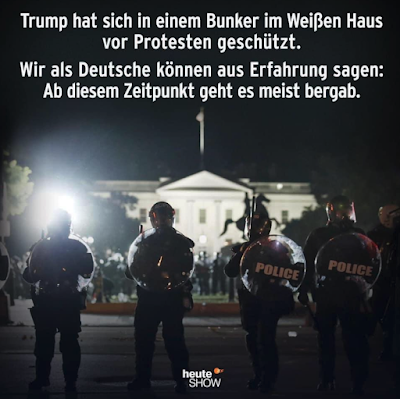 The idea, the theory, the concept, the intent and design of Democracy: "Consent of the Governed." Our elected officials are supposed to represent the interests of the people. "Servant of the People." If the President is calling troops out against his own people, if he is building barricades in front of the White House, with a ring of police and military, well, Pilgrim, something is gravely wrong in good old USA.

As Patti Smith once reminded us: "People have the Power." Of course, we can't take our own power for granted, we need to care, to pay attention, to vote, to voice our concerns if things are not going well. To march in the streets. Peaceful, non-violent protest. That is our right, and our duty as Americans.

The a.m. soundtrack - Miles Davis & Gil Evans - "Sketches of Spain." (1960). Another great Miles Davis record. Unlike anything else he ever did. Shows he could do pretty much anything. Beautiful flugelhorn & trumpet thru-out. Lush orchestrations from Gil Evans. Brilliant. Breath-taking. It has an  old world, Spanish flavor. Makes you think of little villages off the water, bull-fights, beauty, color, life, blood, the poet Lorca. Gorgeous. Thrilling.
Posted by sunnyjimmy at 8:26 AM