"When You Find What Matters is What You Feel..." - J. Farrar 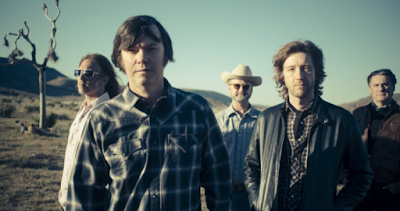 Loved seeing Son Volt (for the first time), last night at a fabulous music room, SPACE in Evanston, IL. My friend and I stood right at the foot of the band, over on the right hand side of the stage. SPACE was pretty much packed, capacity 250 when there's no tables or chairs, all standing room. The room is perfect for music, all wood floors, wood ceiling and rafters, sound buffers on the brick walls. A large stage, superb sound system, cool lighting effects. The sound tech knows the room, a perfect mix. Loud, warm, sound, a r&r mix, vocals prominent but sitting nicely within the instrumentation.

Son Volt is one of the great American bands. They have one stone-cold classic album, their first "Trace," but I will hazard the guess that everything they have done is worthy of a listen. We own three of Son Volt's records: "Trace," (1995), " "Staightaways," (1997) & "The Search" (2007). I picked up "The Search" not long ago, in a bargain bin, and it's a total knockout.

The band has changed, morphed, fallen apart, disbanded, reformed. The only constant has been Jay Farrar, lead singer, guitarist, songwriter. It's his band. Completely. His voice is a powerful, distinctive, thing, so American, dare I say, a Midwestern instrument: a plain-spoken, tough as nails, truth-telling voice. Jay wore dark shades throughout the set, you wonder could he see a thing when he looked out into the audience? The current lineup is truly great. Powerful, layered, stomping, shimmering, American r&r. A tight, exuberant set. Mark Spencer on steel guitar, keyboards, guitar is the not-so-secret weapon.

I was fascinated by all the guitar choreography on stage. Jay was playing various Gretsch guitars, a couple electric hollow-bodies, and an acoustic. There was an elaborate dance between Jay and his guitar tech, changing guitars, the tech tuning them up off stage, bringing them to him, plugging and unplugging, all done expertly and seamlessly. A bit of stage business that was pretty damn impressive.

They opened with new songs from their latest release, "Union." First listen to these songs, I'd say Son Volt still brings it, songs of the moment, songs from the heart and heartland, songs about loss, dissolution, songs about the 99%, you know, the left behind. Funny they were playing these songs on the North Shore where many of the 1% reside.

Later in the set they played songs from "Trace" and everyone in the audience was thrilled, captivated, we all knew these songs. The songs stand as American classics. They did one encore. The last song they played was a cover of The Stones "Monkey Man." It was thrilling, fabulous. Perfect. Genius cover. Great band, great show.
Posted by sunnyjimmy at 7:46 AM