Let's put a name and a face on these two brave women who confronted a Senator. The powerless, appealing to the powerful. 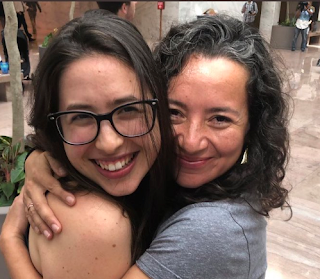 If you haven't watched this video of two women confronting Senator Jeff Flake in an elevator, you probably should, I mean, I strongly recommend you do so. Two very brave women speaking their truth. And they did have an impact, later Flake stipulated there should be a one week delay in the confirmation vote of a Supreme Court nominee, so the FBI can do an additional investigation.


“You have power when so many women are powerless...”

This is one of those moments, I think of the black woman who refused to give her seat up on a bus in the south, or a young MLK dodging bricks in Bridgeport, events seared into our consciousness. Hearing from women who have been afraid to speak up, who have been told to keep quiet, who have been ignored. Let's hope and vow to ourselves that they will never be ignored again...

Posted by sunnyjimmy at 7:42 AM