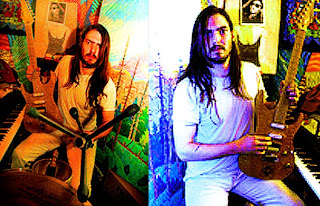 I don't know anything about this guy. Except he wrote a song called "Party Til you Puke." That's some heavy partying. I've been there, done that, and I guess, once you've been around the block once or twice, you realize that sometimes fun isn't really what it's cracked up to be.

But anyway, the following quote totally hits home with me. I've been reading Michael Frayn's philosophical tome, "The Human Touch," it's a big, ridiculous, brilliant book about how we are in a dialogue with the universe which in effect "makes" the universe. If we weren't here, the universe would be one big, silent monologue. Or at least, that's an example of the type of concept we'd come up with, if we could imagine a world without us in it. Or something like that. Frayn's book goes on for about 500 pages, I'm halfway through it, and it reminds me of kitchen discussions my cousin and I had back in the early seventies after a smoking a joint of primo weed.

So this morning I come across this from Andrew W.K.: "I have been very into the idea that the only way the external world exists is by you observing it, and that the ony way you can interact with that external world through that observation is to intend it to be."

Seems Andrew W. K. has been reading the works of the philosopher Martin Buber. He's also exuberant about ideas like the nature of coincidences and paradoxes and solipsism.

Sounds like my kind of guy. Other song titles he's penned: "It's Time to Party," and "Party Hard." I detect some kind of overarching theme here.
Posted by sunnyjimmy at 11:49 AM