Will We All Be Sucked Into the Vortex of Stupidity? 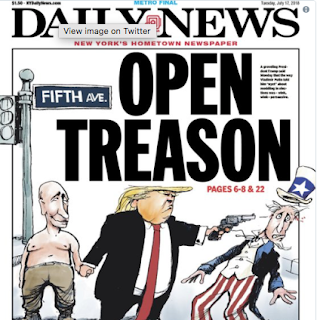 King Idiot. It's best to ignore him. To tune him out. To not read his idiotic tweets, to not listen to his blabbering on the radio, to not watch his dementia-like, fat-carcass, slobbering performances on TV. Listening to the Idiot King will only make you much stupider than you already are. Plus, he will piss you off. You will be outraged, shamed to know that this man supposedly speaks for you and your beloved country.

Last night I guess King Idiot was on the TV telling the world, that yes, indeed, he would cheat to win an election. He did it the first time, and well, hell, he'd do it again. Seems like a terrible thing to admit. But there it is. I mean King Idiot is too stupid to realize he just admitted to everything he was accused of in terms of "colluding" with Russia. You shake your head and think to yourself: "What a fucking Idiot!"

And you wonder what can be done. Does supreme mendacious, corrupt idiocy trump everything else? Don't forget King Idiot has his rabid followers who will never admit this man is a plague and a blight on our teetering democracy, they blindly cling to King Idiot's billowing trousers mouths open craving their own taste of idiocy. The rest of us, are left to ponder the black void of idiocy at the heart of the land.

Will we all be sucked into the vortex of abject idiocy? Shite!
Posted by sunnyjimmy at 8:35 AM