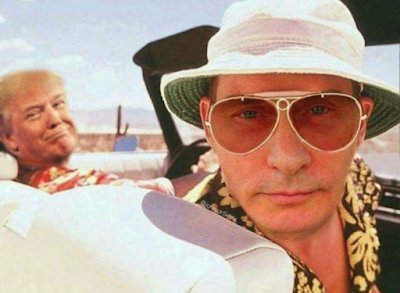 A flurry of news yesterday....

Some of us have known the broad outlines of this story for quite a long time. You don't need to be a conspiracy-minded lunatic to see the crazy truth that is dancing right before your eyes.

"The plea includes evidence, for the first time, that could show how Trump was compromised by Russia while Russian President Vladimir Putin was waging a direct attack on the 2016 election."

Yeah. Read the Steele Dossier in Buzzfeed. Crazy Spy Stuff for sure. But you know sometimes the truth sounds sort of crazy, but the crazy nature of the info doesn't make it any less true.

Also check out Luke Harding's articles for the Guardian.  And be sure to read Adam Davison in the New Yorker, for instance, start with "Michael Cohen and the End Stage of the Trump Presidency."

And check back in with Buzzfeed for "The Crazy True Story of Trump Moscow." Fantastic reporting from Anthony Cormier and Jason Leopold.

There is lots of great reporting from journalists all over the land, be sure to check in frequently with Juliette Kayyem, Natasha Bertrand, Marcy Wheeler, Josh Gerstein, Zoe Tillman, Erica Orden, and the great Washington Post. Don't forget the Atlantic, Buzzfeed, Mother Jones. Be sure to tune into the Rachel Maddow Show, Rachel is giving us a history on Nixon's Watergate, and delving deep into the weeds on this unfolding scandal. She is a great story-teller. Compelling, enlightening.

The story of our lifetime. Yes, it's crazy, improbable, ridiculous, but true: there is a Russian Dupe/Asset in the White House. Yes, that ridiculous, toxic, noxious Circus Clown Con Man did a very, very bad thing. The chickens are coming home to roost... "Look out Mama there's a white boat coming up the river..."
Posted by sunnyjimmy at 7:39 AM