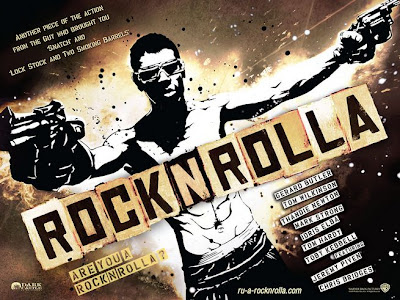 Have you been to Guy Ritchie-Ville? It is a very cool place to be. Many people know Mr. Ritchie only from being Mr. Madonna, and for some reason, being Mr. Madonna (now ex Mr. Madonna) means lots of public attention and ridicule, lots of hyperventilated blathering and tut-tutting.

I guess they met, got married, made a famously savaged movie together (didn't see it), had some kids, got divorced, split some cash, and well that's all she wrote about Mr Ritchie and the Material Girl.

But the reason anyone should know Guy Ritchie isn't because of who he married and divorced, it is because of his series of films based in the over the top, movie-land milieu of British Crime. They are fast and furious, funny, beautifully shot and edited. Ritchie writes them - they are all well-constructed, great dialogue, populated with all these brilliant "character" actors, most of them (the great exception being Brad Pitt as an Irish Gypsy, bare knuckle boxer in "Snatch.") unknowns.

Ritchie's debut film is "Lock Stock and Two Smoking Barrels." It is one of the great debuts of all time. All his other work (the Madonna film is the unfortunate exception) flows from that original spring. It's a cartoon-like, all macho male world - tough guys with big guns, running around chasing down stupid stuff. In this world the tough guys fuck up a lot. Stupid things happen to the stupid tough guys. Very funny.

The other films in the series (it's like different neighborhoods of the same city) "Snatch," "Revolver," "RockNRolla," all have their quirks. They do sort of constitute one grand vision, but each has a unique slant. "Revolver" is a stand-out in that it isn't really a comedy, it is probably Ritchie's "statement" movie. Some might find it baffling or pretentious, but I loved it, and it's broader theme is a killer - greed and ego is our greatest enemy!

The latest in the series is "Rock n Rolla" and it is superb. Looks like there's to be a sequel too. Can't wait. I predict one day there will be Guy Ritchie festivals. I've been having my own little festival in my little private screening room lately. It's a great way slay those winter-time blues!
Posted by sunnyjimmy at 7:39 AM