"He Lifts Me Up!" - The Belfast Cowboy 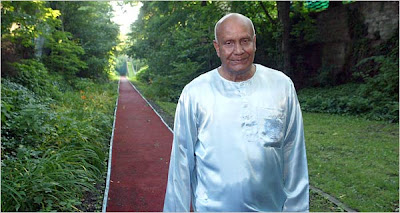 I read obits once in awhile. Is it some magical-thinking way of proving I'm not dead yet? It's a way to find out something about people you didn't really know. A person was born at this time, did this, did that, died at this time, and at this place. There's so much left out. You know that the simple facts tell you something, and still the facts basically miss the essential stuff of what makes a life.

I came across this obit for Sri Chinmoy, a spiritual holy man who founded a meditation center in Queens back in the sixties. He became a guru for some famous people, including the musicians Carlos Santana and John McGlaughlin. I came across his name many years ago. I was a fan of Miles Davis' haunting "Bitches Brew" album, which led me to listening to the great guitar work of John McGlaughlin, which led me to his band Mahavishnu Orchestra. I learned McGlaughlin was a disciple of Chinmoy.

A guy named Jerry Goodman was the violinist in Mahavishnu Orchestra and many years later, I met a guy named Fred Glickstein, who was also in a band with Goodman, a Chicago based band called The Flock, one of the great, lost, psychedelic rock outfits that came and went after a disc or two. Anyway, I kind of count Fred as one of my friends. He lives near me, we chat once in awhile, trade e-mails. He's totally unplugged from the music scene, but he's got a million funny stories. He's a sparkling soul and I'd glad I know him.

Anyway, so in some weird way, I feel connected to Chinmoy via Davis via McGlaughlin via Goodman via Glickstein. So I read Chinmoy's obit with quite a bit of interest. He advocated meditation (yes!), vegetarianism (well, I guess ok!) and celibacy (are you sure? I mean you got to let it out sometime captain!). He was an athelete who slept only 90 minutes a day (that sounds totally crazy to me - isn't that how we break prisonsers at Guantanamo - I mean I need a good eight hours to be somewhat coherent?!), and who ran ultra-marathons and did some heavy lifting.

Here's the really funny part. It seems Chinmoy was a spiritual leader who "literally" lifted people up. He physically lifted them. It was one of his great acheivements. I mean who else can boast that he lifted: Sting, Muhammad Ali, Neslon Mandela, Sid Cesear, Desmond Tutu, Yoko Ono, Jesse Jackson, Susan Sarandon, Eddie Murphy and Richard Gere!?!?

No, he did not lift Van Morrison. But still, when all is said and done good ole Sri was quite the uplifting holy man!
Posted by sunnyjimmy at 11:17 AM