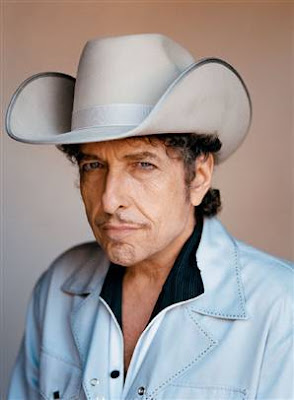 I'm lucky to live in a city where I can hop on a train and in less than an hour I can step off the train platform and walk right into the Chicago Theater. Bob Dylan and Elvis Costello were in the house last night.

It was a very spirited and rousing show. And well, surprise, suprise, it was Elvis who really blew me away. I mean, I cannot criticize Bob Dylan, in my book he's kind of like a river or the grand canyon, or a willow tree. He just is, love him or hate him. I happen to love him, or maybe it's not him, he's a cantankerous, strange and quirky dude, but his music, his poetry in all it's various guises is a gift that keeps on giving. David Kehr talking about Errol Flynn's "The Adventures of Robin Hood," once remarked that the movie was "beyond criticism." (Errol Flynn jumping around in green tights - could be ridiculous, but for some reason it works!). That's how I feel about Dylan. No one, especially not the little man in the black hat and shiny black suit with stripes down his pant legs can live up to DYLAN. There's the man, the work, the myth.

All that said, Dylan has a very tight and solid band backing him these days. There were only two songs that I thought they really murdered. I'd suggest to Bob that "Positively Fourth Street," and "Lonesome Death of Hattie Carrol" just should not be re-arranged in some weird, faux Lawrence Welk manner. I get the feeling that Dylan believes he has the right to do anything he wants to his songs, even arrange them out of existence. Like Piccasso in his later years, no one around him can say "no." Sometimes a good collaborator can save you. Anwyay, that said, these guys know how to do that old-timey stuff as per Dylan's "Modern Times," but it was when they rocked out on the up-tempo numbers where they really grabbed me. I guess, when I go to see Dylan, all those other times I've seen him still resonate with me (Dylan backed by the Band, Dylan backed by Tom Petty and the Heartbreakers, Dylan backed by the guitar masters Charlies Sexton and Larry Campbell). All in all, happy to see Mister Dylan still going strong. He's a true American treasure. 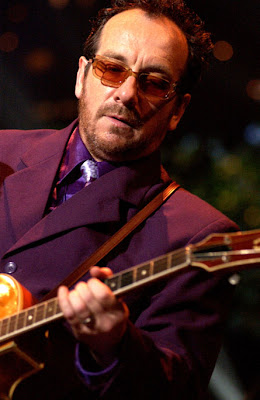 But it was Elvis Costello opening for Dylan who stole the show. One man, one guitar, one voice. He absolutely tore the house down. I've seen Elvis before, with the Attractions, with the Imposters, in fact, I saw Elvis when he first came to U.S. shores all those years ago, at a little club in Schaumburg, Illinois way back when "My Aim is True," first hit the shelves, he's always been good, but this time around, you realize the man really is a master.

Elvis (excuse my French), fucking rocked. So much passion, so in the moment. He had the audience in the palm of his hand. he was wielding an Epiphone Acoustic/Electric, the same model J. Lennon used to play, it was hooked up to a small tube amp, and he got a perfect, creamy overdriven sound to back his superb vocals. I can't say enough. It was so powerful, so inspiring. When he quoted Lennon's line, "I don't want to be a soldier mama, I don't want to die," in "Wake Up," when he did a rousing, punkish, version of "What's So Funny about Peace, Love and Understanding," he hit the bullseye. The audience roared with delight. It was one of the best performances I've ever seen. Totally unexpected. Elvis truly is the King. This one writes his own songs too! Elvis lives!
Posted by sunnyjimmy at 10:42 AM