"I didn't know it was Jesus, I thought it was a monkey." - Larry David 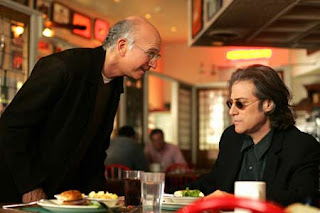 Larry David. I love the guy. I mean, he really, really, makes me laugh. I love how he's always pissing people off, usually when he's trying to do the right thing. My favorite TV show, hands down, is Curb Your Enthusiasm. Larry David basically plays Larry David, and I guess the show is kind of a controlled improvisation with a cast of characters including Jeff Garlin, Richard Lewis and Shelley Berman.

We don't get HBO, so I have discovered this show via DVD. One disc holds 4 shows...it's great to watch one after another in one sitting, kind of a CYE jamboree. Larry David was one of the original creators of the Seinfeld show. I never watched Seinfeld, I mean, I've seen episodes periodically, I recognize that it was a very funny show, but for me, I never quite got hooked, it never really grabbed me, it lacked any kind of biting edge.

Curb Your Enthusiasm is all edge...there's something about Larry David, he's not a schlub, he's smart, he doesn't back down, he's not afraid to offend. He lives in a strange world, he circulates in the stratosphere with the super rich of Hollywood, an unreal and ridiculous world of plenty. Larry tries to navigate and make sense of the "rules of the game." Usually, he's on the wrong side of the fence, I mean, he's a man alone, always out of step with those around him. He's well-intentioned, but no one else sees him that way. He's constantly being misunderstood. But, Larry is never deterred. He forges ahead, living by a code of his own. And the laughs come in waves.
Posted by sunnyjimmy at 12:10 PM