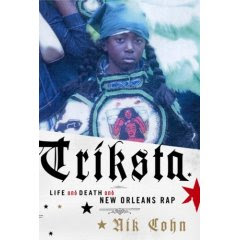 I think a sign of a really good writer is the ability to bring alive a subject that might not, at first glance, be of interest. I think of Melville and whaling, or David Foster Wallace and tennis, or well, a good example, I just finished Nik Cohn's great book, "Triksta: Life and Death of New Orleans Rap," which brings alive another world.

The book was written before Katrina, and the soggy Death of New Orleans, which makes the story he tells even more haunting. Nik writes about being in love with the City, not the tourist trap of Bourbon Street, but of the tenements, the low-down, burned-out neighborhoods, where Hip Hop, Rap, Crank and Bounce thrived, as practiced by ghosts with names like Supa Dave, Sinista, 5th Ward Weebie, P-Town, K-Gates, Bigg Ramp, King George, Lil Mel, Soulja Slim, Bass Heavy, Hot Boy Ronald, Tek-9, and many, many others.

It's a complex tale, with strange connectors and well, what's a white British dude doing hanging out in the hardest and bleakest of hoods anyway? It's a fascinating tale, and character study of people struggling to live and make their mark. Of course, we read the tale knowing that many of these neighborhoods and people were washed away and displaced, refugees in America, neighborhoods that will most likely never be re-built. It's a heartfelt Rap for those on the margins, those looking to have something of the great American Hustle for themselves...it's a sad and noble tale too. And the music, in whatever form, even if it's a beat box, a scratch record, a machine gun burst of staccato verse, whatever, it will not be denied.
Posted by sunnyjimmy at 10:27 AM