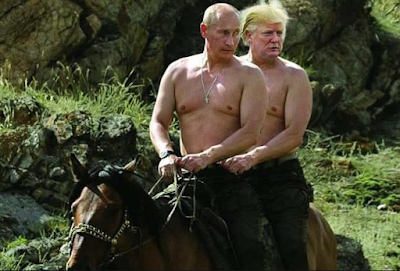 It is sort of heartbreaking to think that Hillary Clinton won't be taking the oath of office on January 20, 2017 because of the FBI's and the Russian's meddling in our election process. It's pretty clear that the "Comey Letter" to congress in late October, really was the "surprise" that robbed Clinton of about 2% of the Popular Vote. And the Russian hack certainly added to the uncertainty and flood of disinformation that swirled around the Clinton campaign. And it's pretty clear and obvious that Putin wanted to help elect Trump. A perfect "two-fer:" Install a friendly puppet at the same time as you weaken the U.S. Democratic system. Putin scores! Why did Putin do it? Zack Beauchamp of Vox games it out for us.

Instead. We face a Trump Presidency. Which is already totally spinning out of control. Check out this great article by Kurt Eichenwald from Newsweek. Kurt has emerged as one of my go-to writers about politics. Trump already has so many foreign conflicts of interest in Turkey, Taiwan, China, etc. We are already talking about foreign countries influencing and bribing the President-Elect. Can we Impeach him before he takes the oath?!

You have to love it when journalists start quoting the Founding Fathers...

"This unyielding principle that foreign powers cannot be allowed to hold sway over a president dates back to the Founding Fathers. In Federalist 68, Alexander Hamilton wrote of the dangers of such a scenario. 'Nothing was more to be desired than that every practicable obstacle should be opposed to cabal, intrigue, and corruption,' he wrote in reference to the powers bestowed in the Constitution. “These most deadly adversaries of republican government might naturally have been expected to make their approaches from more than one quarter, but chiefly from the desire in foreign powers to gain an improper ascendant in our councils.'"

I am rooting for something surprising and drastic to happen between now and Inauguration Day. If Trump's "win" was a Black Swan event, why not follow it with another Black Swan?

At this point I am rooting for the Black Swan to be followed by another Black Swan!
Posted by sunnyjimmy at 8:07 AM