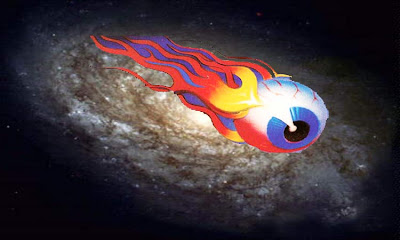 It was bitterly cold last night. Four of us trekked through the dark and dirty streets of the city to get to a small rehearsal space. I was low, maybe not lower than a snake's dick, but somewhere in the vicinity. We did a little warm up, ran lines and then worked through the first scene. It's a new Black Forest production called "the Flaming Eyeball." I'm thinking it's some of the best writing I've done, it came out of nowhere, I wrote it just for "the fuck of it," when I was working on another piece, the dreaded "rock opera" that ultimately I pulled the plug on. Sometimes it's best not to talk about a piece until it's done. The talking somehow kills it, drives a stake into the heart.

Anyway, the first line came to me awhile back, "there's a golden ball of energy hurtling through space," and then the rest (three acts) came out in a wild blast of energy. Not sure what I'm trying to say, but this one is done, and ready to find life on stage. The rehearsals, watching the actors interpret the text and trying to work out the little universe I've given bones to, is a really cool process. We go up in March.

Anyway, afterwards, I was no longer that lowly pathetic dude slinking through the city scape. I was fired up, engaged in the process of creating a mad little thing that never existed before. The three actors did their thing (three very talented, soulful women) and watching it all unfold was totally captivating. Can't wait to see what we make together.
Posted by sunnyjimmy at 10:27 AM