Death of an Icon of Cool. 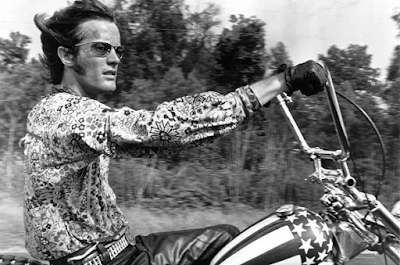 George Carlin once said that his ultimate prayer was: "Dear God, let me be a Cool Guy." I always thought that was the ultimate life-ambition. That was enough. Be a Cool Guy. Although, maybe you could pray for it, but you couldn't conjure or order it up, it wasn't something you could learn or whatever, God-given, built into the fabric of your being or maybe something that descends upon you like a gentle mist.

I would add the debauched Errol Flynn, the ill-fated Sean Flynn, the tragic James Dean. I would throw in Bob Dylan, John Lennon, Sam Shepard, Keith Richards, Patti Smith (I know, she's a woman, but still a very cool guy). I know I am probably leaving out a whole host of Cool Ones, but this list isn't supposed to be definitive, it's just off the top of my head while I guzzle coffee this morning.

Anyway Peter Fonda has died. He is one of the Icons of Cool, for sure. I first saw him in all his glory  with my cousin at a Drive-In in the early 70's watching a double feature of "Dirty Larry, Crazy Mary" and "Easy Rider." "Easy Rider" was the more memorable movie, one of my favorite all-time films. It was an eye & head opener. Made in 1969 it won an award Cannes, it inspired a whole new independent movie movement and featured r&r on the soundtrack.

We heard Hendrix, the Band, the Byrds, Steppenwolf on the soundtrack. That was new and exhilarating. The film was breakout hit for Jack Nicholson, and the beginning of a long breakdown for Dennis Hopper, and at the center of the storm, in the ultimate zone of cool there was Peter Fonda as Captain America.

Peter may not have been as an accomplished actor as his father or his sister, but he was cooler, no doubt. No one was cooler. He carried himself with a powerful, quiet grace. Every movement. Every gesture. Cool. The Death of an Icon of Cool. Take care Peter. See you down the road. Take it Easy, Rider...
Posted by sunnyjimmy at 8:47 AM