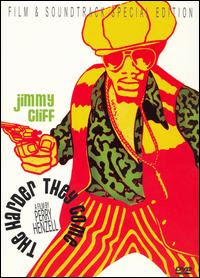 The sun is out today. The first day in quite awhile. I walked down to the lakefront and meditated on a bench. A good day to be alive.

For some reason Jimmy Cliff's voice kept popping into my head. He was singing the line, "The harder they come, the harder they fall." A line from one of the greatest reggae songs ever put to tape. Also, the title of one of the best independant movies ever made, and maybe the best soundtrack ever recorded for a movie...and, well, hey, that's the trifecta!

Jimmy Cliff stars in the movie and sings some other great tunes on the soundtrack. When it came out back in the early seventies of the last century, it totally put reggae on the map, in a totally international way. Jimmy Cliff kind of led the way for the reggae explosion that burst across the airwaves, the vanguard of the sound included: Bob Marley & the Wailers, Peter Tosh, Bunny Wailer, Toots and the Maytals, Burning Spear, and yes, Desmond Dekker. Plus there are all those obscure artists who made a cool record, and then, disappeared. You can find some great gems on Trojan records - they have multiple cd retrospectives - I've got one called "Rude Boys."

There is so much great reggae music, it's now a fixture in the international music scene. But no one can outshine Jimmy Cliff and Bob Marley for charisma, and style, and well, they truly embody an amazing music.

So, the song the "Harder They Come," also has the line: "I'd rather be a free man in my grave, then living as a puppet or a slave." It's a catchy line, and I understand the sentiment...but man, the grave sounds so damn final...can I pick "unhappy puppet" and try to work it out?
Posted by sunnyjimmy at 3:42 PM