"Got a smoke?" - Napoleon Wilson 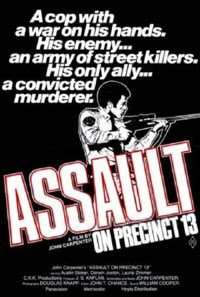 The last two days, I basically fell off the face of the earth, I mean, I'm not trying to be overly dramatic or anything, although, drama is in my blood, it's all just theater don't cha know?! I mean, I came down with a really bad bug that totally flummoxed me. I could barely walk, talk, or see straight. This really cuts down on social interaction. The primary actitivty? Sleep. In my few lucid moments I watched a couple of DVDs.

I discovered a classic film, John Carpenter's "Assault on Precinct 13," (not to be confused with the re-make of the same title released in 2005). Carpenter is a true auteur (Wikipedia: In film criticism, the 1950s-era auteur theory holds that a director's films reflects that director's personal creative vision, as if he or she were the primary "auteur" (the French word for 'author'). In some cases, film producers are considered to have a similar "auteur" role for films that they have produced.)

Carpenter's contributions to the film include: writer, director, music composer, editor. That about covers it. It's a really great movie, in a small, unassuming way. It's low budget, low tech, no-name actors, no flab, no flash, basically one set, with a few exteriors. It's an existential piece, something that Satre or Camus could recognize and endorse. No wonder there's a cult for this movie in Europe. I guess it's Carpenter's homage to Howard Hawks "Rio Bravo." (Another classic: any movie with John Wayne, Dean Martin, Ricky Nelson and Walter Brennan in the cast has to be considered a classic in my book.)

So in Carpenter's movie our existential heroes are a cop, a killer, and a girl. They all do what they have to do, when they have to do it. They are "out of time." They are drawn together because they want to live. There is no judgement. There are no status games, or maybe well, it's all one big status game, but the players are on their own, they can't blame anyone else for where they are, who they (mom, dad, god, devil -- they are blameless) have become, what they do. There is the moment and the action, and each man or woman is responsible to each and every moment and action. They are free actors in a world of crushing responsiblities, free to make a million choices, some sublime, many brutal or absurd.

The film is pure, clean, exhilarating. It's a "genre" movie. It's not claiming to be profound, but then, isn't that when a piece can really sneak up on you? So, I don't mean to praise it too much. I went in with low expectations, I could barely move, I was laid up, wrapped like a mummy, I wanted to see action on the screen, but of course, by the time the credits rolled, I had seen so much more.
Posted by sunnyjimmy at 8:06 AM